That's right!!!!  Machines will be the death of me!

I have this piece of junk for a printer.  It's beautiful on the outside, nice and shiny.  It copies, faxes, emails, cooks up a great supper....prints.  Ya....prints alright!  It prints only in color.  Anything that is in black, comes out blank.

Off to the box store for new cartridges, thinking that was the problem.

You would think a corporation this large would have a simple solution to this problem, wouldn't you?  I mean, they must be dang millionaires/billionaires by now...especially if everyone buying their products have to pay $15. plus dollars for every cartridge they replace...so that's $60 bucks a shot for this printer.  See what I mean.  THEY ARE MAKING CRAP MERCHANDISE and I for one, will never again purchase anything HP....EVER AGAIN!!!!

I know.  I know.  I can use the various colors to print off documents.  I guess that's my only solution.  You would think someone at HP would have at least given folks that option, even if it's an obvious one...but NO...they don't even offer that.

See.  I'm really ticked off about this!  REALLY!  Machines are wonderful, necessary killer beasts.  They let you use them and just when you become dependent on them for their usefulness, they come in for the kill, slicing at your heart and leaving you wondering what hit you.  Ya.  Machines do that.  They do.  They're like a heartless lover who only thinks of taking what they can get and leaving you abandoned with no black print job!

I could go on.

Well, then there's all the paper that gets wasted not to mention your time and brain power.  I even called in the big guns...Matt.  He did all the looking and unplugging and Googling and such.  So, that's two people involved.  But then there was my special trip to the box store to purchase a black and magenta cartridge because the machine asked for them.  Ya, the crap products talk to you too!  So, after replacing those two cartridges, the black still didn't print!  So, then I figured perhaps it needed all the cartridges replaced.  Texted Matt and asked if he would stop by the said box store on his way home and purchase a new cyan and yellow cartridge...plus an extra black one to have on hand....all in all, a $75. buck touch...PLUS TAX!!!  Yep.  That's why HP owners are sitting back on their fat behinds, raking in all my and millions of other folks' money.

Since retirement really doesn't produce much revenue, I may just think about going into production of crap merchandise myself.  At least it would be a lucrative business.  And I could wile away my days, twiddling my fingers, waiting for the cash to roll in from all my crap merchandise...and every now and then I could say something on the internet forum about my crap merchandise...I could say "Please turn your crap machine off and on again", while the cash flows in and piles up on my new Epson printer.

And this is how she summed up yesterday...a day with family...a day of reminiscing...


"We said good bye today to Eddie, my dad's brother. As we did so and as the day wore on MY family gathered all together later on (missing Brit) and reminisced of days gone by. We shared some good laughs of Uncle Eddie and it made me thankful for our time as a family and reminded me just how nice it was & still is to be able to share in each other's lives...time...which really is such a gift. It's hard, as I get older, watching my parents age, as I realize how short life really is in the watching of how quickly moments become memories before we have time to fully draw our awareness to our own presence in each time & place. I am lucky to have loving parents & an amazingly gentle brother alive who still love, as well as, offer me up endless amounts of patience, which in turn humbles me! Cheers to memories & families, with which none of us should ever have to go without!"


Yes, yesterday was special in so many ways and at so many levels.  Shannon summed it all up beautifully. She captured the importance of time...how we need to appreciate it and use it for our good and the good of others.

I did appreciate our day...probably as much as she did, even in the midst of death passing by.
Posted by Sharon Kent at 2:00 PM No comments:

Ken's brother passed away this week.  He was 80.  Although in the past few years, we haven't really communicated that much, other than a coffee at McDonalds, a few BBQs at our trailer or the last time, while he sat and received his kidney dialysis.  He wasn't happy with the way his life was...dialysis three times a week for 4-6 hours at a time or more.  He was a bit of a grumpy fellow most of the time...who wouldn't be!! But it seemed to be in his nature.  Some folks are simply like that.  He enjoyed an argument, thinking he was right all the time. One of the things he will be remembered for.

But there was another side to Eddy.  He was generous to a fault. He had that kind of nature.  And he loved giving his all to his grandsons.  They were precious to him and never failed to mention their accomplishments...a true and devoted grandpa.

Life wasn't easy for him after his dear wife, Lorna, passed away.  Half of him was missing...like it is for most people who have lost their spouse after having been together for a very long time. And his health was very poor. Diabetes.  Heart problems. Kidney failure.  It all added up to his death.

I remember (can it be nearly 50 years ago!) him lending his little brother, Kenny, his brand new car to take for a spin.  We were dating at the time and here was my boyfriend pulling into our driveway with this HUGE deep purple, 2 door something-or-other car with plush everything inside and little tiny lights all around the floorboard, not to mention stereo sound on the radio!  I was impressed....impressed that my boyfriend's older brother, Eddy, would lend him his most prized possession to impress me.  And as the years went by, there were times he would take us fishing in his boat, when we had none. Times when he and Lorna would allow us to stay in their cabin, when we had none. That generous spirit impressed me through the years.  He was a good man underneath his grumpy exterior!

I recall him too, when he was younger...30 or so.  He was a handsome fellow with blond wavy/curly hair and an infectious laugh.  He and Lorna made a nice looking couple.  He was always proud of his wife too, I think.  She was a highly trained and proficient Director of Nursing at the Holy Family Hospital and he enjoyed her extroverted ways as it allowed him more friendships.  Otherwise, he was a 'quiet' kind of guy.

His grandsons will miss him, I know.  And even though we haven't been close in recent years, we shall miss him also.  The good thing is that his bad health and having to be alone...is over.

May God gather him up into a much better place than this...peace to his memory.
Posted by Sharon Kent at 10:20 PM 1 comment:

Not sure if I'm quite ready for the snow to stay.  It hasn't arrived as I type but it's expected to lay us flat by Monday.  Don't get me wrong...I love the white.  I love to see it falling and then sparkling when the sun comes out again. It's all so...wintry and Christmasy.

The older I get, the more I can sympathize with folks who don't look forward to the long months ahead, filled with cold weather and leafless trees. I may just need a 'project' of some sort. I have some crazy notions and ideas but we'll see how motivated I can become.

But getting back to the snow...I believe it's something within me that gets excited about watching a snow storm.  I could sit for hours and hours and just watch it pile up with the wind whipping it wildly, giving it shapes with ridges and banks winding it's way around corners of buildings and vehicles, covering trees and fields and rivers....giving the storm a creatively beautiful mind of its own. Yes, a storm simply creates it's own beauty.

Tomorrow will find me sitting silently by the window...watching the beauty that will envelop us. 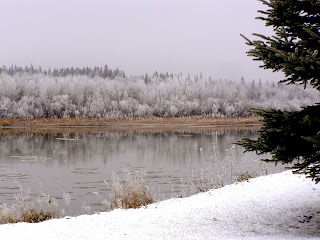 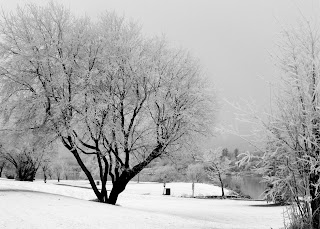